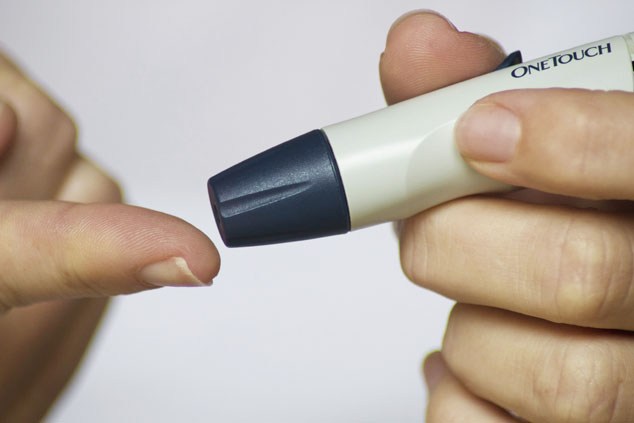 When it comes to diabetes regarding Baby Boomers’ health, everyone agrees that eating right is vital for good prevention and management of the disease. If you don’t know what that means, then you will not recognize the bad advice coming from mainstream medicine. Turn your BS detector on…this may surprise you.

Before getting started, I’ll just quickly mention that diabetes is getting worse – especially in our age group. Statistics be damned! The only data point for you is YOU and your body. Here is what you should know to combat this dreaded disorder.

The sooner you improve your fuel, the better off you will be. Always.

This is where general agreement ends and arguments about what ‘eating right’ means. Indeed, the old name of ‘sugar diabetes’ for type 2 diabetes has long been called into question. Long-term consumption of sugar is still associated with development of the disease. However, it’s the production and function of insulin that seems to explain more about what goes wrong leading up to diabetes.

It also explains several other diseases of modern civilization.

As most people already know, insulin, a hormone produced by the pancreas, enables the body’s cells to absorb glucose (blood sugar). On the road to diabetes, however, cells start losing their ability to respond properly to insulin. This is called insulin resistance.

In response to insulin resistance, the body produces even more insulin to deal with excess blood sugar. This is a formula for health failure. Blood sugar and insulin levels both increase. The end point is an overtaxed pancreas that finally gives out and fails to produce any insulin at all.

As this end point is approached, insulin and blood sugar increasingly cause serious damage to many tissues. And it all begins with too much of those pesky dietary sugar-releasing carbohydrates that induce overproduction of insulin in the first place.

Insulin is a crucial hormone for good health. Too much insulin, however, is highly inflammatory. It will ruin your health in many ways.

The Insulin Connection to Disease 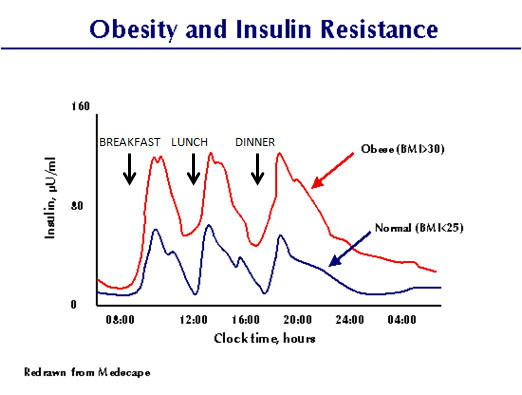 As the graph above shows, the pancreas responds to a meal by producing a spike of insulin. Then it returns to a between-meal level within about 3 hours (blue line). Notice that the spike is much higher, and stays high even between meals, when cells are insulin resistant (red line, as in obesity).

To limit damage by excess insulin, it’s beneficial for a diabetic (and everyone else) to limit carbohydrate intake. This is how to reduce the amount of blood sugar that leads to too much insulin and the development of insulin resistance.

Now for Some Bad Advice

Let’s just pick on one doctor who exemplifies the bad advice handed out to diabetics regarding diet. The only reason for singling out this particular doctor is because he and his advice for diabetics were prominently featured in an article in the the AARP magazine not too long ago (1). Such advice represents the party line for mainstream medicine. It’s what you can probably expect from your own doctor, too.

The MD in question is Dr. George King, who is the Director of Research and Head of the Section on Vascular Cell Biology at the Joslin Diabetic Center in Boston, as well as a Professor of Medicine at Harvard Medical School. Seems like a super-qualified source for health advice, right? Hold that thought.

Let’s take a look at what Dr. King recommends in the article mentioned above. These are the 7 so-called ‘best tactics for fighting the blood sugar disease’.

Step 1: Cut the fat, up the fiber. Specifically, the ideal diet consists of 15 percent fat, 15 percent protein, and 70 percent carbohydrates.

Remember, overproduction of insulin is at the root of diabetes and several related inflammatory diseases. Carbohydrates become blood sugar that stimulates insulin production.

Hmm. Houston, we have a problem.

The challenge for diabetics and everyone else is to keep insulin levels under control. Let’s take a look at a relatively simple study published way back in 1996 that shows how to do that (2). This is a rare study in that it involved patients in a hospital setting where every last smidgeon of food was controlled and kept track of. Here is what the summary graph of food intake looks like: 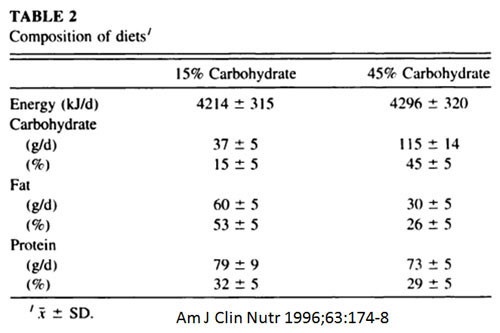 The ‘Energy’ component translates into about 1,000 Calories per day, so this represents a low-calorie diet. It is a variable that confounds certain interpretations of the results, but we are stuck with it. Nevertheless, the two groups of experimental subjects represent ‘low’ carbohydrate (15 percent) and ‘high’ carbohydrate (45 percent) diets.

Although the study focused on changes in weight and body composition after 6 weeks, the most telling result was the comparative influence of each diet on insulin levels. The graph of this result (indicated by the added red arrows) showed the following:

Although this table looks a little fuzzy due to technical issues with image reproduction, it shows a drop in insulin of about 8 percent with the high-carb diet vs. about 46 percent on the low-carb diet.

Keep in mind that the ‘high’ carbohydrate diet is 45 percent of intake in this study and that Dr. King recommends this to be 70 percent for diabetics.

We can debate the merits of this study all day long, and even throw in a bunch of other studies that compare changes in weight and body composition in response to different diets. The bottom line, though, is that low-carb eating controls insulin levels and high-carb eating is like adding gasoline to a fire.

Note also that Dr. King’s advice is low-fat, even though fat is the only food group that has no impact on insulin levels.

The advice about fiber is a little better, although the reason is supposedly that ‘fiber makes you feel full more quickly and helps you absorb calories more slowly’. This comment ignores the observations by others that satiety depends more on eating protein and fat. Oh, and absorbing calories at all is a biochemical and physical misconception. Almost everyone gets this wrong. Measuring food intake based on its calorie potential is simply idiotic.

What About the Other 6 Steps?

Here they are in a nutshell, with a bit of added commentary.

This is typical medical arrogance. Don’t get me started.

Finally, a piece of good advice!

Great idea for everyone, although exactly how to do so is not included with Dr. King’s instructions.

Step 5. Stop being a weekend warrior.

The explanation here advocates exercise. It is another great idea with mostly missing ‘how-to’.

Step 6. Exercise in a cold gym.

Good luck with that. The concept behind this advice is based on activating so-called brown fat. Experiments to do so suggest that any significant change in brown fat activity requires ice and lots of it. Merely exercising in a cold gym is inadequate.

This is, of course, the mainstream medical party line. In this case, the Avandia ‘scandal’ may also be behind this advice. Avandia and similar insulin sensitizers (Rezulin, Actos) have serious side effects, including liver damage, heart attack, stroke, and heart failure. Rezulin was recalled in 2000, Avandia was placed under severe restriction in 2010 (since lifted by the FDA!), and Actos has been repeatedly linked to heart failure and bladder cancer.

Go ahead and ask about new meds if you wish, but the track record on old meds does not bode well for their replacements.

All in all, Dr. King’s advice is either just plain bad or falls WAY short of being helpful.

Although the focus on diabetes nearly always centers around insulin, this hormone is actually secondary to the ‘master hormone’ – i.e., leptin. Leptin is THE key energy-signaling hormone that controls your metabolism.

Medical associations of all kinds, including the American Diabetic Association, routinely fail to address how this hormone works. Ignoring it is a phenomenal omission. When leptin fails to work properly – a condition called ‘leptin resistance’ – insulin won’t, either.

You may already surmise that merely reducing your carbohydrate intake will not, all by itself, lower your leptin resistance. Metabolism is much more complicated than that.

First and foremost, getting a better handle on dietary and other strategies for preventing and treating diabetes has to start with leptin, not insulin. And it has much more to do with other factors besides diet.

See what I mean in my recent post that explains what these factors are, here: Age-Related Obesity: Causes and Solutions.

Why start with obesity? As you’ll see in that post, it’s behind much of what goes wrong as we age. Type 2 diabetes is just one of the many health problems linked to obesity. If you don’t know how to solve obesity, you will most certainly fail to slow down the oncoming diabetes train that is bearing down on you.

What is Even Scarier than Type 2 Diabetes?

This should be a real wake-up call for all of us. Type 3 diabetes is a relatively new term that refers to Alzheimer’s Disease. Think diabetes on the brain!

Diabetes is not merely a blood sugar problem. It is a brain inflammation problem. Type 3 diabetes will literally cook your brain until it stops working.

If that doesn’t keep you up at night, nothing will.

Of course, you can eliminate any worry about diabetes by getting control of your leptin again. That post linked above gives you some simple guidelines on how to do so. It is a good start.

If you are really serious about your health, though, you will get much more detail on diabetes and many other topics in my monthly Boomer Health Reports. My reports provide the defense you need against mainstream medical propaganda that mostly serves the pharmaceutical industry.

Getting at the real truths behind human biology is the key to your good health, not drugs.